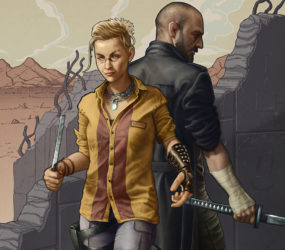 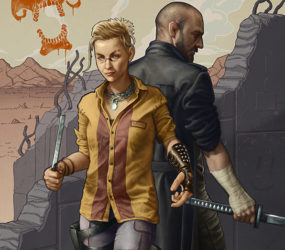 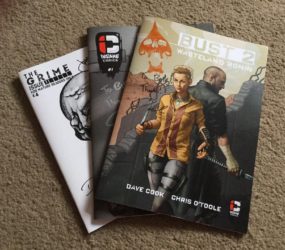 After illustrating the first issue of Bust, Card Shark Comics invited me to return to create the cover artwork for the second instalment in the critically-acclaimed indy comic book series; Bust 2: Wasteland Ronin.

The story and theme of Bust 2 is very much in the vein of 80’s post-apocalyptic action movies, like Mad Max, Robocop & Escape From New York. This illustration would obviously have to draw influence from those same sources while still coming across as new, original and unique.

After a number of preliminary sketches, this cover art was digitally painted in Adobe Photoshop. While the main two characters were painted in a full, almost realistic style, the background was drawn in a more traditional comic book style, a nod to the style of the artwork within the interior pages.

Bust 2: Wasteland Ronin was launched via crowd-funding after a successful Kickstarter in late 2015, and is now available in comic stores and from the Card Shark Comics website – cardsharkcomics.com

Bust 2 is written by Scottish writer and journalist Dave Cook, and interior artwork is drawn by comic artist Chris O’Toole.