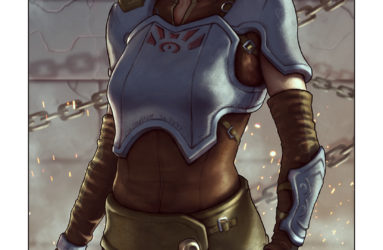 Card Shark Comics, the creators of the Bust series, asked me to create illustrations for a series of promotional tarot cards as part of a bonus for Kickstarter backers of Card Shark Comics latest title Vessels.

Vessels is the first issue of a Dark Souls inspired medieval fantasy style series, from Card Shark Comics. I would be creating illustrations of the three main characters of the series, for three printed tarot cards.

Each illustration is fully painted in Adobe Photoshop, and designed in a typical tarot card style fashion. With each character assigned a tarot card suit to match as close as possible to their archetype.

Vessels issue 1 Kickstarter was successful, and the comic was released in June 2016 to wide critical acclaim. Check out the Card Shark Comics website for more information on the series – cardsharkcomics.com